The Xeon X5570 outperforms the best Opterons by 20% and 17% of the gain comes from Hyper-Threading. That's decent but not earth shattering. Let us first set expectations. What should we have expected from the Xeon X5570? We can get a first idea by looking at the "native" (non-virtualized) scores of the individual workloads. Our last Server CPU roundup showed us that the Xeon X5570 2.93GHz is (compared to a Xeon E5450 3GHz):

It seems like all the advantages of the new platforms such as fast CPU interconnects, NUMA, integrated memory controllers, and L3 caches for fast syncing have evaporated. In a way, this is the case. You have probably noticed the second flaw (besides ignoring the hypervisor) in the reasoning above. That second flaw consists in the fact that the "native scores" in our server CPU roundup are obtained on eight (16 logical) physical cores. Assuming that four virtual CPUs will show the same picture is indeed inaccurate. The effect of fast CPU interconnects, NUMA, and massive bandwidth increases will be much less in a virtualized environment where you limit each application to four CPUs. In this situation, if the ESX scheduler is smart (and that is the case) it will not have to sync between L3 caches and CPU sockets. In our native benchmarks, the application has to scale to eight CPUs and has to keep the caches coherent over two sockets. This is the first reason for the less than expected performance gain: the Xeon 5570 cannot leverage some of its advantages such as much quicker "syncing".

The fact that we are running on a hypervisor should give the Xeon X5570 a boost. The Nehalem architecture switches about 40% quicker back and forth to the hypervisor than the Xeon 54xx. It cannot leverage its best weapon though: Extended Page Tables are not yet supported in ESX 3.5 Update 4. They are supported in vSphere's ESX 4.0, which immediately explains why OEMs prefer to run VMmark on ESX 4.0. Most of our sources tell us that EPT gives a boost of about 25%. To understand this fully, you should look at our Hardware virtualization: the nuts and bolts article. The table below tells what mode the VMM (Virtual Machine Monitor), a part of the hypervisor, runs. To refresh your memory:


Thanks to being first with hardware-assisted paging, AMD gets a serious advantage in ESX 3.5: it can always leverage all of its virtualization technologies. Intel can only use VT-x with the 64-bit Guest OS. The early VT-x implementations were pretty slow, and VMware abandoned VT-x for 32-bit guest OS as binary translation was faster in a lot of cases. The prime reason why VMware didn't ditch VT-x altogether was the fact that Intel does not support segments -- a must for binary translation -- in x64 (EM64T) mode. This makes VT-x or hardware virtualization the only option for 64-bit guests. Still, the mediocre performance of VT-x on older Xeons punishes the Xeon X5570 in 32-bit OSes, which is faster with VT-x than with binary translation as we will see further.

So how much performance does the AMD Opteron extract from the improved VMM modes? We checked by either forcing or forbidding the use of "Hardware Page Table Virtualization", also called Hardware Virtualized MMU, EPT, NPT, RVI, or HAP.


Let's first look at the AMD Opteron 8389 2.9GHz. When you disable RVI, memory page management is handled the same as all the other "privileged instructions" with hardware virtualization: it causes exceptions that make the hypervisor intervene. Each time you get a world switch towards the hypervisor. Disabling RVI makes the impact of world switches more important. When you enable RVI, the VMM exposes all page tables (Virtual, Guest Physical, and "machine" physical) to the CPU. It is no longer necessary to generate (costly) exceptions and switches to the hypervisor code.

To cut a long story short, it is very important to keep the percentage of TLB hits as high as possible. One way to do this is to decrease the number of memory pages with "large pages". Large pages mean that your memory is divided into 2MB pages (x86-64, x86-32 PAE) instead of 4KB. This means that Shanghai's L1 TLB can cover 96MB data (48 entries times 2MB) instead of 192 KB! Therefore, if there are a lot of memory management operations, it might be a good idea to enable large pages. Both the application and the OS must support this to give good results. 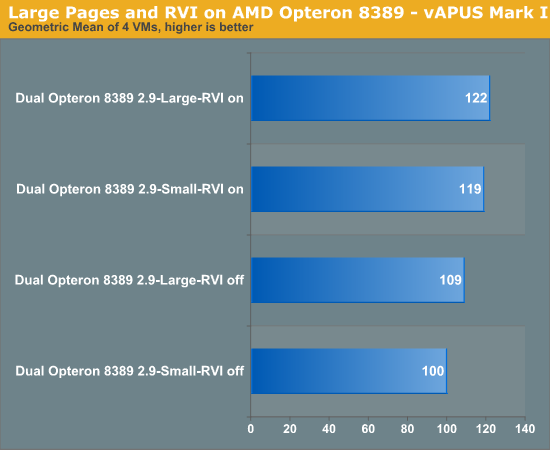 The effect of RVI is pretty significant: it improves our vApus Mark I score by almost 20%. The impact of large pages is rather small (3%), and this is probably a result of Shanghai's large TLB, consisting of a 96 entry (48 data, 48 instructions) L1 and a 512 entry L2 TLB. You could say there is less of a need for large pages in the case of the Shanghai Opteron.