Visiting the MSI booth today at Computex was rather exciting – they were showing off two rather interesting GPU fan technologies, alongside their portable Thunderbolt GPU device, GUS.

The first is a new GPU fan design, for users who want either increased GPU cooling, or increased VRM cooling.  Initially being a small sized GPU, a user can add a second fan on top of the first, to increase the airflow blowing directly onto the main part of the cooler above the GPU: 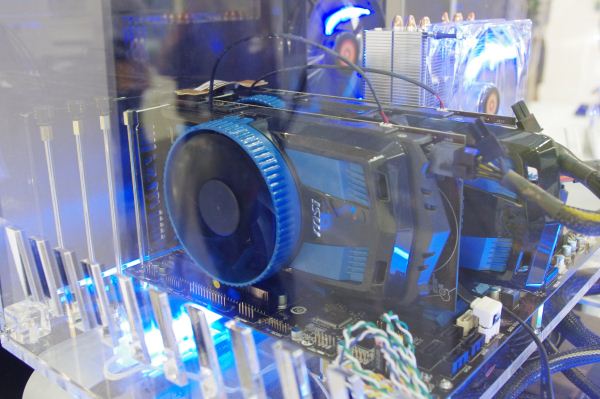 This cooler can expand if a user has a long enough case, and the second fan can be moved to the edge of the cooler, providing more cooling along that side of the GPU. 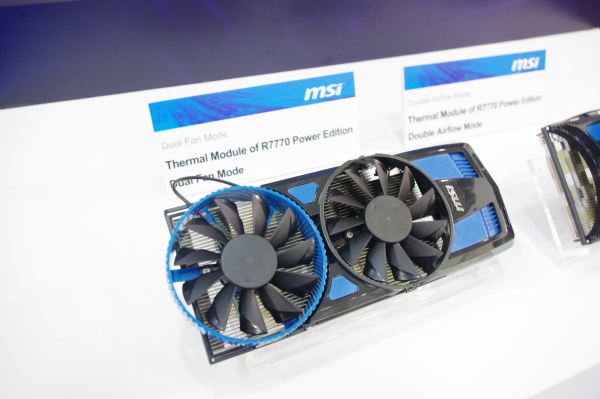 This extra fan is limited to 40% RPM due to the controller being used.  MSI tell us that there are plans to make this fan fully adjustable.

Also of interest to us is the introduction of the ‘dust-free’ methods MSI are bring to their main user line of enthusiast SKUs.  At startup, the fans on the GPU will spin in the reverse direction for 30 seconds in an attempt to draw dust out of the GPU (but dump it into the case).  After 30 seconds, the fans will spin back the other way to produce the desired cooling effect.  MSI say this has come about due to the Asian market, where pollution can cause dust buildup in cases and coolers.

GUS is what part of the world has been waiting for - an external GPU housing.  Data transfer comes through a Thunderbolt cable to provide 10 Gbps bandwidth, and MSI state they should be selling this housing with a GPU up to 150W, so 7870, 7850 and 6850 models to begin with in Q3/Q4 if demand is high enough and Thunderbolt takes a hold in the market. 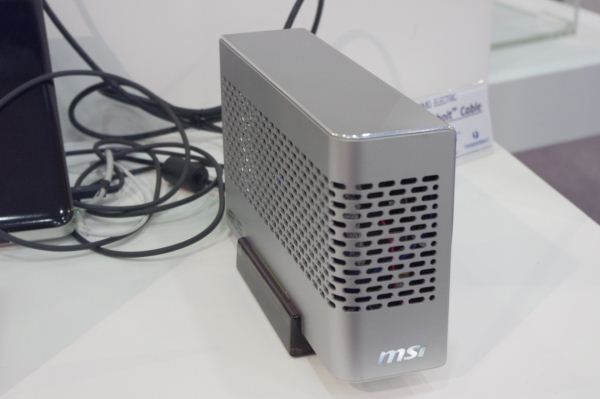 More photos in the gallery below.